Measures to preserve the savannas in Southern Africa

The savannas in Namibia are among the driest regions on earth. As grazing land they are of great importance for livestock and game. However, changing climatic conditions and increasing intensity of land management endanger the unique savanna landscape. Since the beginning of the year, ISOE – Institute for Social-Ecological Research has been working as a cooperation partner in the two German-Namibian research projects NamTip and ORYCS on the question of how to achieve more sustainable pasture management with different management approaches. 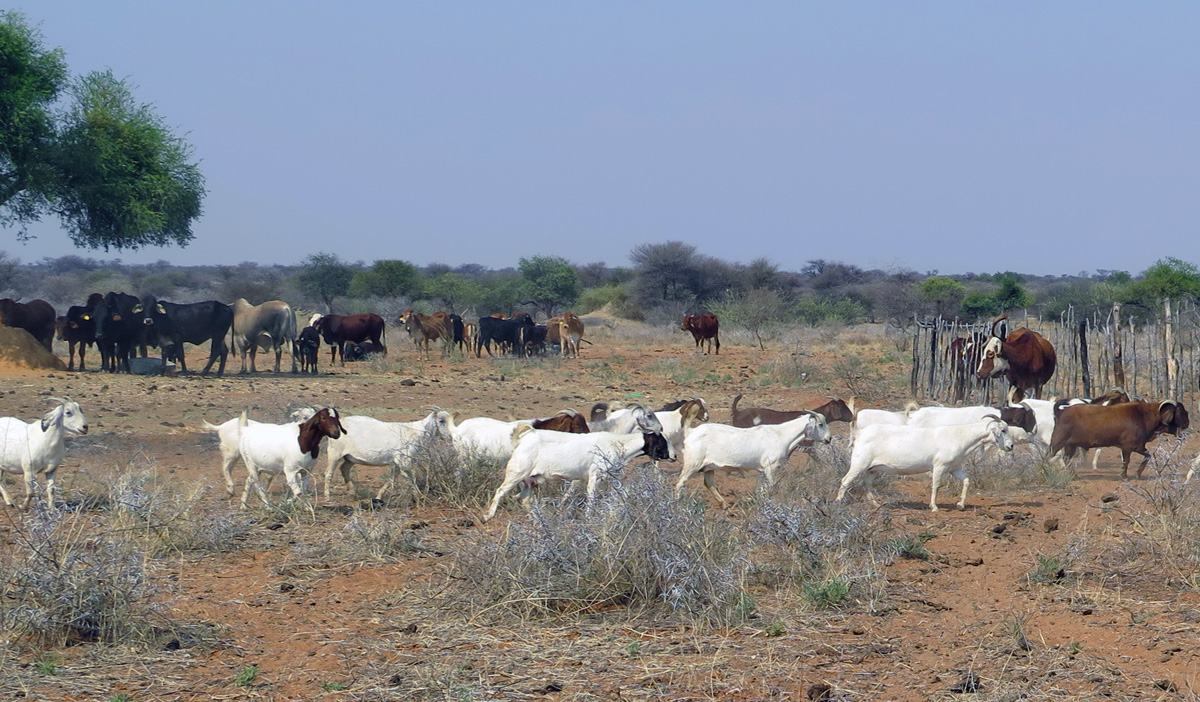 Pasture management through livestock farming is a widespread utilization strategy in savannas. However, if vegetation and soils are permanently stressed and environmental conditions change, for example after periods of drought, this can lead to dramatic changes in the ecosystem. An initially gradual degradation of the soil can then very suddenly lead to a collapse or “tipping” of the ecosystem. The serious consequences for society and nature include the loss of biodiversity and the endangerment of food resources.

These tipping points are the focus of the NamTip research project. If these they are identified at an early stage, abrupt and irreversible processes such as the loss of grasses and ultimately desertification can be prevented or slowed down. The NamTip research project aims to improve the understanding of these critical tipping points in the Waterberg region in Namibia and to develop measures to effectively counter desertification.

The role of wildlife management in the conservation of savanna ecosystems

Land use and animal husbandry play an important role in the conservation of savanna ecosystems. Compared to conventional livestock farming, management strategies with wildlife are considered promising, as these animals are well adapted to local climatic conditions. In some areas of Namibia, however, concepts of rangeland management with wildlife have proven to be very conflict-prone, as farmers, village communities and authorities often pursue different interests. This is the starting point for the ORYCS research project, in which the project team is investigating how wildlife management can counteract savanna degradation in an area south of Etosha National Park. At the same time, strategies will be developed to constructively regulate related conflicts.

Due to the intensive use of the savanna, ecological tipping points are typically linked to social and economic tipping points. This means that if lifestyles or income strategies change, this has an impact on the environment and vice versa. So far, though, social-ecological analyses of such phenomena are still lacking for arid regions. However, a deeper understanding of the socio-ecological interrelationships is a prerequisite for developing sustainable management strategies and dealing with conflicts.

ISOE's research, both in NamTip and ORYCS, focuses on the knowledge of local farmers and the societal factors leading to changes in the ecosystem. In the summer of 2019, initial interviews with farmers and other stakeholders from the study regions of both projects were conducted in both research projects. In April and September, international project meetings and stakeholder workshops were held in Namibia, attended by scientists, farmers and representatives of ministries and NGOs. The aim of these meetings and workshops was to discuss research approaches, management options and appropriate formats for transferring scientific results into practice.

More about the projects