The example of the Main metropolis: How cities can contribute to the preservation of insect diversity

While insect extinction is progressing in forests, fields and nature reserves, cities are increasingly providing suitable habitats for insects. Therefore, urban society is  called upon to preserve their diversity as its behaviour has an influence on the biodiversity of dragonflies, bumblebees and related species. Using the example of the Main metropolis, Frankfurt’s research and practice partners, led by ISOE – Institute for Social-Ecological Research, are for the first time investigating the relation between urban lifestyles, everyday practices and insect diversity. The SLInBio research project is funded by the Federal Ministry of Education and Research (BMBF). 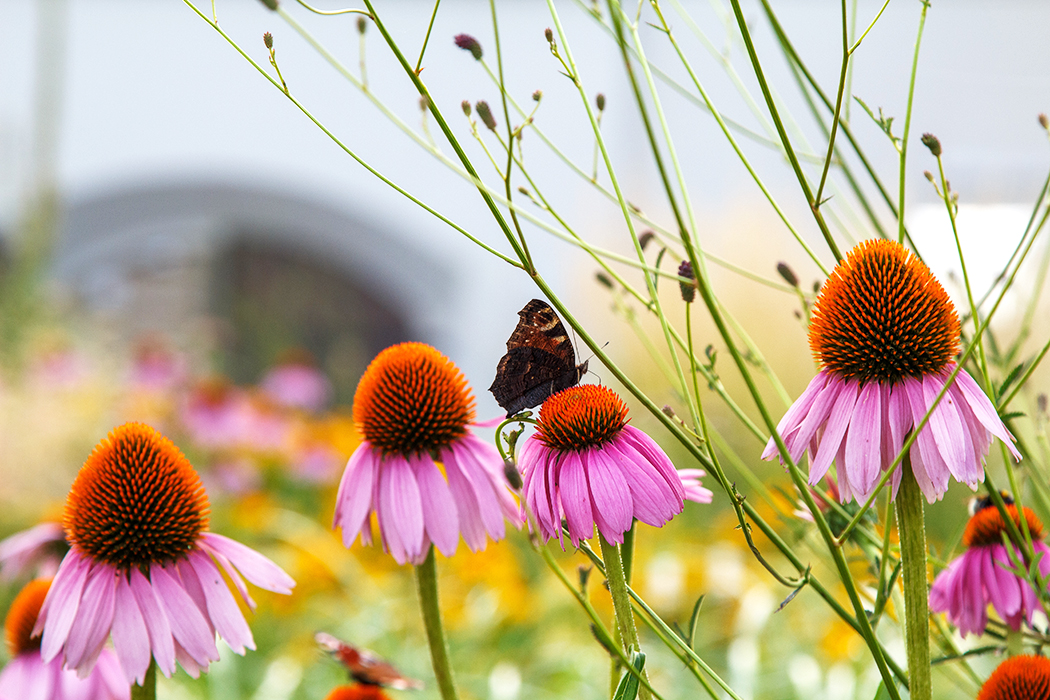 Urbanisation – among many other drivers – is responsible for the global loss of biodiversity. And yet cities also hold great potential for preserving biodiversity. Insects can find a variety of suitable habitats and foraging opportunities in gardens, parks, green strips and balconies. In view of the different needs that citizens associate with urban green spaces, the question arises as to how the so-called valorisation of biodiversity can succeed. In other words, how can an enhanced perception of the value of nature be promoted, leading to conscious, environmentally and insect-friendly actions in everyday life?

To answer this question, Frankfurt institutions with proven biodiversity expertise have joined forces in a research network. Under the lead of ISOE – Institute for Social-Ecological Research, the Senckenberg Research Institute and Nature Museum Frankfurt, Goethe University Frankfurt and NABU Frankfurt, in cooperation with the city’s Palmengarten as well as BioFrankfurt, the Parks Department and the City of Frankfurt's Environment Department, are investigating new concepts to contribute to the preservation of insect diversity together with the city's population.

Understanding the social dimension of biodiversity

Until 2024, the research network will deal with different areas of urban life within the project “SLInBio: Urban lifestyles and the valorisation of biodiversity: dragonflies, grasshoppers, bumblebees & co”. The aim is to gain a better understanding of how, for example, the use of parks and green spaces is related to insect diversity in the city. What role does green recreation play, for instance? Do the way citizens spend their leisure time, their diet, their choice of transport or their type of housing have an influence on the occurrence of insects in the city? To what extent does their lifestyle influence their actions with regard to effective insect protection?

“A special aspect of our project is certainly that for the first time we are thinking about and investigating biodiversity from the perspective of society,” says SLInBio project coordinator Marion Mehring, head of the research unit Biodiversity and People at ISOE. “To this end, we are combining social-empirical methods with insect monitoring and ecotoxicological studies and we are also testing participatory formats that open up new experimental spaces for the urban population with regard to biodiversity and insect protection,” says the geo-ecologist.

From knowledge to action: New formats for environmental education

Why are the experiences and attitudes of the urban population so important for the research project? “We know that not everybody likes insects, and not all insect species are equally popular,” says Mehring, “but cities can only be habitats for different insect species if citizens recognise and value their importance for urban ecosystems.” Mehring emphasises that this does not only require more information about biodiversity, but also personal experiences that can have an activating effect and change attitudes. To generate interest in and motivation for insect conservation, people need to be given concrete opportunities.. “Existing knowledge alone does not usually engender commitment,” says Mehring.

That is why in the course of the research project new environmental education formats and artistic interventions are offered by the Senckenberg Research Institute and Nature Museum Frankfurt, NABU, ISOE and the Frankfurt Palmengarten. In this project, the Senckenberg Research Institute and Nature Museum Frankfurt is also investigating insect diversity in the relevant green spaces. The Department of Biosciences at Goethe University deals with the influence of pesticides on insect diversity in the urban experimental areas while ISOE addresses questions of lifestyles and perception as well as attitudes in the population towards insects and develops discourse and participation formats for the urban population. ISOE is also responsible for the transdisciplinary cooperation and evaluation of the project. The Citizen Science Community in Frankfurt that was already established in the preliminary phase will also play a major role in the research project.

The project “SLInBio – Urban lifestyles and the valorisation of biodiversity: dragonflies, grasshoppers, bumblebees and co.” is funded by the Federal Ministry of Education and Research (BMBF) as part of the funding measure “BiodiWert – Valuing and safeguarding biodiversity in politics, business and society” as part of the BMBF’s Research Initiative for Biodiversity Conservation (FEdA).